1. Remove any labels from your bottle so that you can watch the action.
2. Fill the bottle to the very top with water.
3. Place a small pea-size piece of modeling clay at the end of the point on the pen cap. (see drawing)

4. Slowly place the pen cap into the bottle, modeling clay end first. (some water will spill out – that’s okay) It should just barely float. If it sinks take some clay away. If it floats too much add more clay.
5. Now screw on the bottle cap nice and tight.
6. Now for the fun part. You can make the pen cap rise and fall at your command. Squeeze the bottle hard – the pen cap sinks…stop squeezing and the pen cap rises. With a little practice, you can even get it to stop right in the middle.

Impressive, but how does it work? This eaxperiment is all about DENSITY. When you squeeze the bottle, the air bubble in the pen cap compresses (gets smaller) and that makes it more dense than the water around it. When this happens, the pen sinks. When you stop squeezing, the bubble gets bigger again, the water is forced out of the cap, and the pen cap rises.

If it doesn’t work: play around with the amount of clay and be sure the bottle is filled to the very top before putting on the cap.

Soy Sauce Diver: That’s right, next time you go to your local Chinese Food restaurant, ask for a packet of soy sauce (the kind they use for take out orders) Don’t open it – just put it in the bottle the same way instead of the pen cap. When you squeeze the bottle the air bubble inside the packet compresses and become more dense. The bubble in the packet makes it rise and fall just like the pen cap. This sometimes works with ketchup and mustard packs too. Have fun!

1. Does the size of the bottle affect how hard you have to squeeze the make the diver sink?
2. Does it matter if the bottle is not filled all the way with water?
3. Does the temperature of the water affect the density of the the diver? 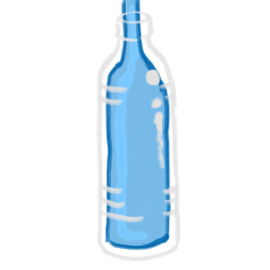 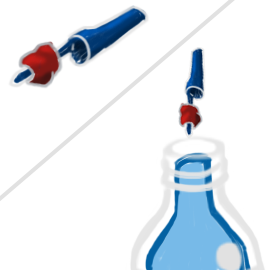 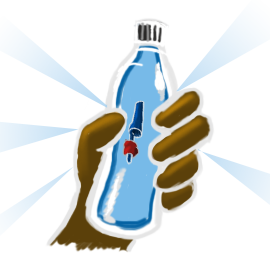