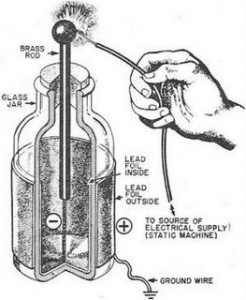 This is a clip from a show that highlighted some of Ben Franklin’s science experiments. The host is actor/comedian Kevin Pollak. Here we are demonstrating one of Franklin’s favorite gadgets called a Leyden jar. It was invented in 1745 by Pieter van Musschenbroek and it became an important invention for studying electricity.

A Leyden jar is able to store large amounts of static electricity. The more it is charged with static, the stronger the voltage becomes in the jar. In this clip, actor Marc Evan Jackson is really getting shocked by the Leyden jar, and his reaction is quite real. While the charge in this clip was harmless, a large leyden jar can hold enough of a charge to kill a person.

Ben Franklin would connect several Leyden jars to create a powerful shock. All of the leyden jars lined up reminded Franklin of of a battery of cannons side by side. Franklin would later be the first to call stored up electricity a “battery.”