Science On The Set of Little Fockers

One of the best parts of sharing experiments on this website is hearing back from people that get to try them out. I was happy to recently find out that the young actors that appear in the movie, The Little Fockers were fans of sciencebob.com. 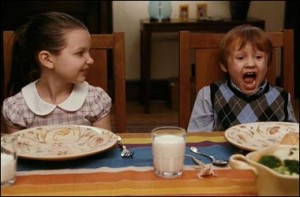 Even famous child actors have to go to school every day, so film and TV productions set up a special room or trailer that gets used as the classroom while the filming is going on. A teacher is on the movie set every day to teach lessons in between filming scenes. While this film is targeted for adults, we were happy that some great science lessons were going on behind the scenes with the young actors. The lessons were led an amazing teacher named Maura who enjoys exploring hands on science and bringing learning to life. Maura was kind enough to contact me and send us some behind-the scenes photos from the set of the movie. 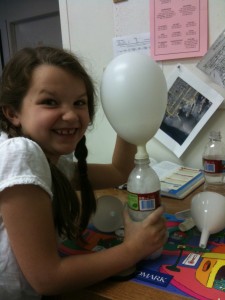 Daisy Tahan plays Samantha Focker in the film. She’s been acting since she was just 4 years old. In this picture she is trying out our experiment titled “The Fizz Inflator” which allows you to inflate a balloon using only the power of chemistry. As you can see it was quite a success for Daisy. To try out the experiment yourself, just click HERE. 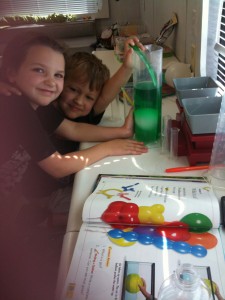 Daisy also experiment with non-newtonian fluids when she created oobleck using corn starch and water. In the right combination, these two ingredients make very unique goo that can act like both a solid and a liquid. (If Daisy’s hands look a little blue in any scenes of the movie, now you will know why.)

Daisy and fellow actor Colin Baiocchi, who plays Henry Focker in the movie, confirm what famous scientist Archimedes observed hundreds of years ago regarding the displacement of water when an object is placed in it. The graduated cylinder with the green water allowed them to measure how much the water was raised when different objects were placed in it.

Maura reports the two actors also got to try out our film canister rockets. We’re happy that our experiments were able to provide some fun and learning on a backlot in Hollywood as much as they are in classrooms and living rooms around the world. Thanks again, Maura!

We’d love to see YOUR pictures of our experiments in action. We may post them right here on our blog. You can email them to [email protected]