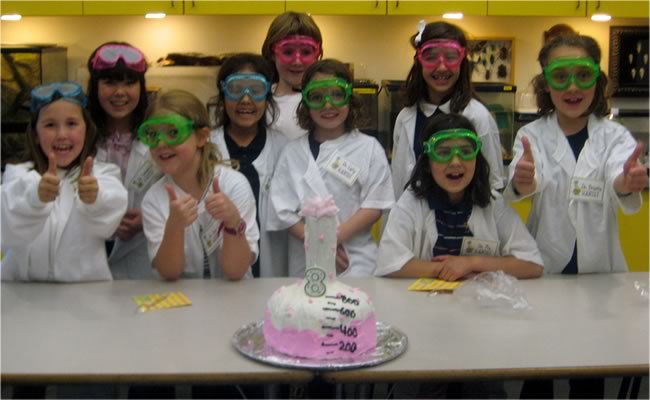 Kim Fogarty is the parent of an 8 year old science enthusiast, and when it came time for her daughter’s birthday party, there was no questions as to what the theme was going to be. The party was billed as an event with, “cool chemical reactions, wacky experiments and explosive fun.”
Kim writes: I used ideas garnered from the Internet, including ScienceBob.com (thanks, Bob), and I compiled a party agenda full of active, fun experiments, all which went over very well with the ten girls. As a teacher, I was fortunate enough to rent my school’s science classroom to have the party, but it can be done anywhere you have room to prepare and no worries about a few spills.

For the cake, I made a flask cake that was featured in the March 2009 Family Fun magazine. I also made “lab coats” using t-shirts that were cut down the middle, and we gave each party-goer a pair of kid-sized safety goggles as they arrived. As for experiments, we did Color Symphony, which was a big hit, and also the Fantastic Foamy Fountain (I varied the experiment and used regular hydrogen peroxide and still got exciting results as you can see in the photo.) We also mixed up a batch of “Super Slime” purchased from Science Bob Store. (My daughter is still playing with the slime a month later – currently, she is investigating what happens when you put it in the freezer.) We also played with instant snow and explored some bubbling mystery solutions that they enjoyed. 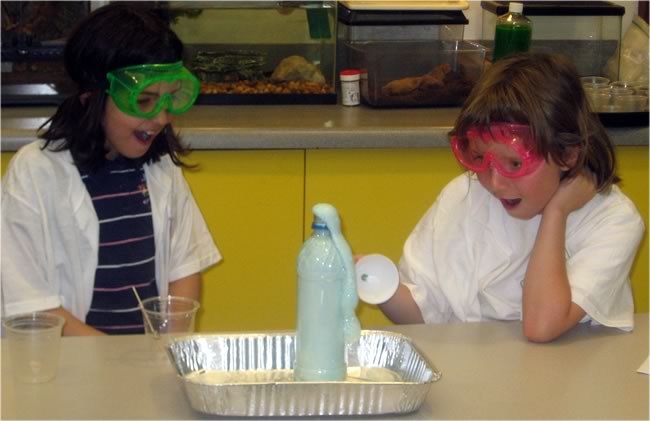 For goody bags, I made fabric drawstring bags that could be reused (going green, you know) and they were filled with test tube experiments – like growing spheres and insta-snow. Guests also got to take home their “lab coats” (each with a custom name tag) and their goggles. I also included a booklet filled with the experiments and the science behind them, as well as the Internet links to their sources and a couple of sites that promote science for girls – check them out: braincake.org and iwaswondering.org. I highly recommend a science party – everyone who was invited came and had a good time.