I had another exciting appearance filled with explosions, tornados, and, well, salad. Let’s break down some of the science.

TOILET PAPER TORNADO
This easy-to-do demonstration allows you to have a visual representation of the centripital energy of the spinning blades and the opposing energy of the moving air created by the blades. This creates a simulated vortex of toilet paper. If you plan on trying this out, here are some tips:

If you make your own Toilet Paper Tornado, (and you should) be sure to tag it #toiletpapertornado in your social media posts so I can shout it out.

EXPLODING HYDROGEN
Many of you may have seen a sign in a hospital that reads, “NO SMOKING – OXYGEN IN USE” and would logically assume that oxygen is flammable. This demonstration showed two traits of oxygen; first, that oxygen is NOT flammable at all, and second, that oxygen can intensify any fire. (the reason for the hospital warning) The balloon filled with hydrogen and oxygen burned very fast and very loud. I could easily feel the shockwave of the the last balloon where I was, and many of the crew said they could as well. Incidentally, the explosive reaction of the hydrogen and oxygen likely produced some water (H2O) during the reaction.

VACUUM CANNON
The vacuum cannon is a simple concept: remove most of the air from a tube, and then use air rushing back in to propel any object in the tube. In our early tests with a ping pong ball, we were able to use a chronometer to clock the ping pong ball leaving the barrel at 845 feet per second – over 350 miles per hour! We were even able to blast the ping pong ball right THROUGH a ping pong paddle. Since we were able to move a ping pong ball faster than a “speeding bullet,” we thought it would be fun to see if we could actually get a model of Superman to faster than a speeding bullet.
A model of Superman was sculpted by Jon Neal specifically for this demo and then cast in rigid foam. While it it never got through the brick wall, it certainly did quite a bit of damage to Superman. 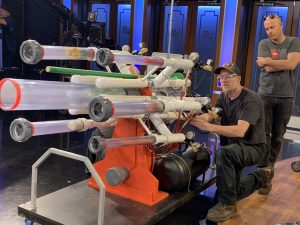 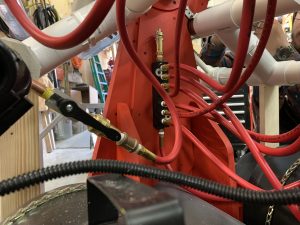 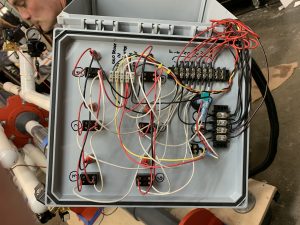 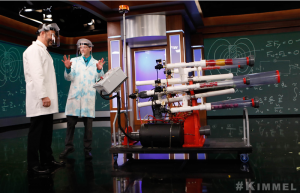 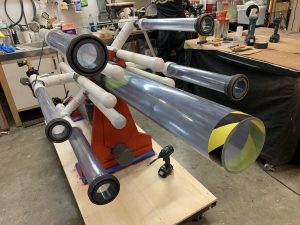 SALAD CANNON
The salad cannon was an epic build that brought together several talented people to make it happen. The original idea was to build basic “potato” cannons, fill them with veggies, and trigger them all at once. My crew determined it might work even better if we used a piston-style system which creates a more intense release of air through the barrel. We also decided to build an ‘Electronic Menu” that would allow Jimmy to select the items he wanted in the salad and then trigger them on command. We used some commercially available chopping blades at the end of each cannon to slice the vegetable instantly as they exited the barrel. The only exception was the lettuce which got cut to the perfect size just from the force of the air blast. The array required lots of custom parts and electronics and it took over a week to build and test.

It was a lot of fun putting these demos together and working with the uber-talented team at JKL.