How do you fill a pool with foam in 5 seconds? It’s not an easy task. After demonstrating the classic Elephant Toothpaste reaction in countless ways over the last 8 years, and even setting the Guinness World Record for the largest Elephant Toothpaste reaction, I thought I had seen it all – then Mark Rober called. Mark is a talented engineer, YouTube All-Star, and all-around great guy who wanted to take the classic demo to new heights – literally!

What you don’t see in the video, however, is the days of testing  that went on behind the scenes to pull these demonstrations off. It turns out that, at a large scale, Elephant Toothpaste can be a fickle demo; slight variations to the chemistry, and the reaction can increase, or decrease significantly. If you change the temperature of chemicals a bit, or mix the chemicals a little longer, it can be the difference between filling a pool, and, well, overflowing it.

THE CHEMISTRY
Hydrogen peroxide is basically water (H2O) with and extra oxygen (making it H2O2 ) But don’t be fooled into thinking it is close to water. Concentrated hydrogen peroxide can result in a strong chemical burn if it gets on your skin. To create the elephants toothpaste reaction a second chemical is added (know as a catalyst) which basically tears-apart the hydrogen peroxide into water while releasing Oxygen gas inside the bubbles.

THE REACTION
The reaction can be triggered in lots of ways. In all the videos other than the giant pool version, we use a solution of Potassium Iodide to break apart the molecules. For the pool version, we wanted it to be safe to touch, so we started with a diluted hydrogen peroxide solution and used off-the-shelf dry yeast mixed with water as the catalyst. Yeast contains an enzyme called Catalase that does the job of breaking down the hydrogen peroxide. It also creates a kind of foam that tends to hang around a bit longer. (GET DIRECTIONS FOR THE YEAST VERSION HERE.)

It took 3 tries to get these to hit right on, but the effort was worth it with a perfect crash.

This was a test of the Elephant Toothpaste filled balloon. A piece of scrap wood with a needle on it acted as a spear. The result was beautiful.

This carousel of foam was one of our experimental surprises. The foam was supposed to go higher, but we top-loaded the reaction with food color which diluted the peroxide. It is one of my favorite shots in the video. Here’s an extended clip.

SCALING UP
We scaled up using a 5 gallon bucket, and then a kiddie pool with the hope of getting the foam to just reach the top of the pool and this first scaled up test was promising:

OVERFLOW!
Why did our foam overflow the swimming pool? There are many variables in this experiment that ranged from the temperature of the chemicals, to the addition of water from food coloring, to the efficiency of the mixing of the yeast and water. We’re still not exactly sure what bumped up the amount of foam, but let’s face it, it was better to overflow the pool than have it come up short. 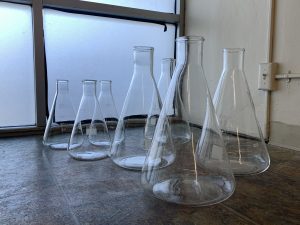 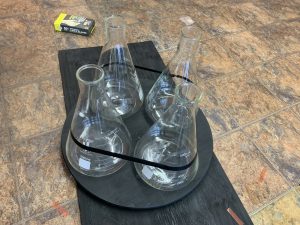 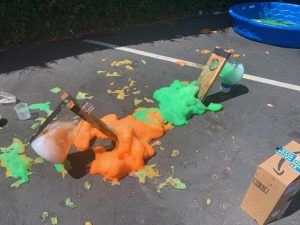 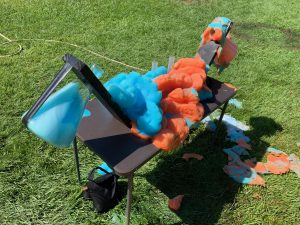 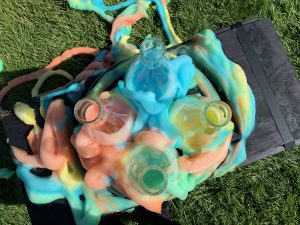 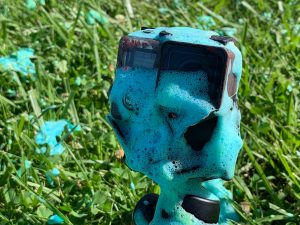 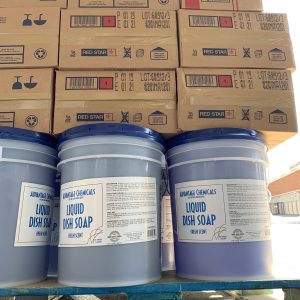 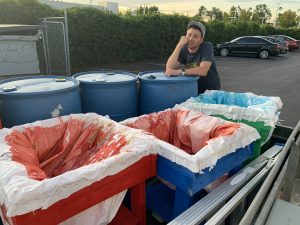 CLEAN-UP
One of the nice things about the reaction is that it breaks down into generally harmless,  bio-degradable components when the chemistry is correct. (Basically you end up with soapy water with small amounts of  either iodine or yeast in it) Cleaning the pool was simply a matter of hosing down the coloring and soap and disposing of what was left down the drain like you would after doing the smaller, home version.