Sarah Toney homeschools four active boys ages 2, 4, 6, and 8 in Tennessee. She recently tried out a simple experiment to help her boys observe a cool chemical reaction.

For Sarah’s experiment you will need:

Sarah writes:
“The goal of the experiment was to observe a chemical change that produces heat. My boys got to see the different indicators that a chemical change was taking place- bubbling, fizzing and the temperature on the thermometer was going up. They were actually pretty amazed by this one. I keep listing the ways to tell if a chemical reaction has taken place….they’ve seen the bubbling, they’ve seen the gas given off…..I guess they didn’t really believe that heat could actually be created by just mixing 2 things.”

Another great part of this experiment is that the bubbles produced contain oxygen. This can be demonstrated by lighting and blowing out a wood match or splint. When the smoking match is brought near the bubbles, it re-ignites from the oxygen.

How does it work?
Hydrogen peroxide is H2O2. Than means it is water with an extra oxygen. The yeast contains a chemical called catayse that releases the oxygen creating the bubbles and it also releases heat (an exothermic reaction.) This is a simple version of our Fantastic Foamy Fountain experiment. The instructions for that experiment can be found HERE.

You can make this a true experiment by adjusting the amount of yeast and peroxide to try to get the greatest increase in temperature. You can also dissolve the yeast in water before adding it to the peroxide to see if that has an effect. 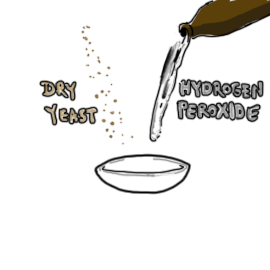